Contrast sensitivity allows you to tell the difference between the foreground and background. It's a crucial aspect of your visual function, particularly in low-light situations.

Common scenarios which require contract sensitivity include driving at night, in the rain or fog, or reading a newspaper, where the writing is printed on a gray background. The inability to distinguish objects clearly is not simply an inconvenience; it can lead to car accidents or falls that may cause injury.

Reduced visual contrast sensitivity is often a symptom of a more serious eye condition, such as cataracts, glaucoma or macular degeneration. This is why it's important—especially for those over 50—to undergo an annual eye exam. Your low vision eye doctor will measure how well you can tell the difference between light and dark by using a specific chart where the characters fade from black to gray gradually. If symptoms are present, your Low Vision of Tennessee low vision eye doctor will provide you with treatment options, such as visual aids and devices to help you improve contrast sensitivity.

The onset of this condition is often gradual and people may not notice a change in vision as it progresses. The following are common signs of reduced visual contrast sensitivity:

As with reading, poor visual contrast sensitivity doesn’t affect the ability to see objects, except when these objects are the same or similar colors as their surroundings. For instance, it may be difficult to locate black gloves in a black purse or see a white bird flying in a cloudy sky.

3. Tripping Over Curbs or Steps

People with contrast sensitivity difficulties may start realizing they have a problem if they keep tripping over curbs or steps because they don’t see them clearly. Steps and curbs are often the same shade as the surrounding surface and may not be visible to people with this vision problem.

People with reduced visual contrast sensitivity may struggle to drive in certain conditions:

Contrast sensitivity is essential for driving because it allows the driver to see road signs, pedestrians and road curves, and to distinguish between the road and the curb.

Even people with 20/20 vision can experience a noticeable decrease in their visual acuity if they are exposed to glare or if the letters on a chart are of a similar color to the background.

The Pelli Robson test was designed specifically to determine if a patient has difficulties with contrast sensitivity. The test is similar to the Snellen test because it features horizontal lines of letters. However,  in this test, instead of shrinking in size with each descending row, the letters show less contrast, appearing in ever weaker shades of gray against a white background.

If you have difficulty distinguishing between objects and their backgrounds or seeing road signs and steps, schedule an eye exam with Dr. John Pino at Low Vision of Tennessee today.

Q: How Can Visual Contrast Sensitivity Be Improved? 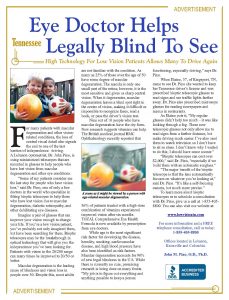